Showing posts from October, 2008
Show All

October 31, 2008
Well, I've finally finished the Otherland Quadrilogy. It was the best 4000 pages I've ever read. It's shocking how it was written back in the late 90s. So many concepts addressed were way, way ahead of their time. In my article "Virtual Unreality", I touched on a few of these before I had heard of the Otherland books, but these books go into more depth that I could have imagined. Second Life, which was only released in 2003, a couple of years after the last Otherland book, appears to be our closest manifestation of the books. Concepts that have originated in Second Life were predicted in Otherland, whether the users of Second Life were aware of Otherland or not. The books are a fascinating forward look at metaverses, virtual reality, and artificial intelligence. At the start of every chapter there is a newsfeed, giving a snippet of what is going on in the late 21st century world. Everything from politics to entertainment is reported on, giving the book even
3 comments
Read more

October 20, 2008
User Generated Content is increasing exponentially, as is the ease of creating and hosting home made material. To get an idea of what this might mean for us in the future, we've only got to look at the best example of UGC around today: YouTube. Blogging was great, but there appears to be far more power in a video than a long winded piece of text. Home made internet radio is pretty popular, but sadly not to the extent it could be. For this I blame the lack of microphones as standard on modern PCs. YouTube has allowed people to present themselves and their opinions in a way far more effective than has ever been seen before. Who knows how this could evolve. Anyone can create relatively high production values given the right software. As it becomes easier to edit, present, manipulate, and even research content, more and more possibilities open themselves up to amateur creators. Professionally created material that amateurs could use in their own content, such as blue screen back
Post a Comment
Read more

Extreme Multi-tasking of the Future 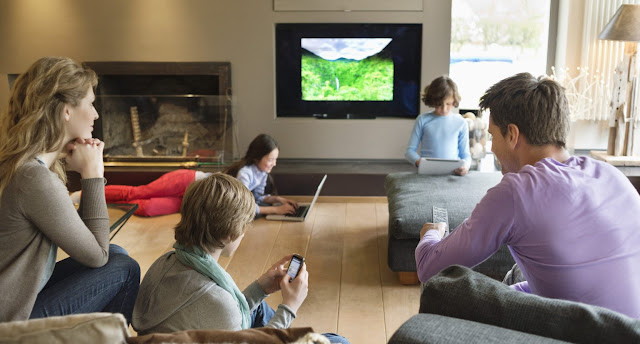 As consumer choice increases, and software teaches us to multi-task, attention spans are getting shorter. TV appears to be the first casualty of this change of attitude. Simply the advent of more channels started diluting TV audiences in the late 90s. Sheer volume of choice has made people realize that they no longer need to watch what they're told to watch, that the TV doesn't have the same power over their lives any more. Even quality programming hasn't saved it, as the “On Demand” paradigm has put timing in the hands of consumers. As well as choice and control over TV content, the rise of DVD, the internet, and video games has further dispersed consumer attention. The new generations are growing up with an abundance of choice over their entertainment. This alone is causing them to demand choice and control in everything they do, something that is soon to have a major impact on our lives. With all that choice, it's hard to stay focused on one thing at a tim
1 comment
Read more
More posts