How to Destroy Humanity

Nuclear weapons are so 20th century. If you want to bring annihilation to the planet for not conforming to whatever depraved idealism you aspire to, there will soon be many much more interesting ways to do it. Unlike nukes, these technologies won’t be reserved for elite governments.

Nanotechnology presents many interesting possibilities. How about using self replicating nanoscopic robots to turn everything on the planet into grey goo? This kind of destruction would be so effective that nothing would remain of the present world. Perhaps this kind of disaster has already happened in our history? As there would be no evidence, we would never know! However, for many supervillians or religious fanatics, disassembling us to our core molecules just wouldn’t be fulfilling enough. 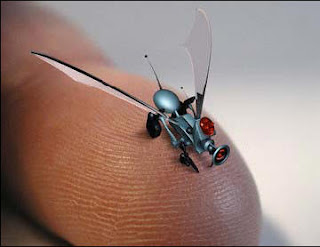 Fear not, the destructive power of nanotechnology is limited only by our imaginations. What about swarms of predatory nanobots, programmed to hunt down and kill “non-believers” and kill them in any manner of ways – asphyxiation, crushing, burning, or simply tearing them apart? Having a non-solid physical presence they would be virtually impossible to catch and destroy. Nano-assemblers, machines capable of manufacturing anything with atomic precision out of basic molecules such as carbon, look set to change the entire world as we know it. They would put an end to world hunger, propel the entire world into luxury, and have untold effects on the economy.

Or, they could be used to undermine security measures, creating weapons in volatile scenarios, thus reversing power balances in an instant. Imagine terrorists gaining access to the Whitehouse unarmed, only to fabricate guns once inside. Or an entire country arming every citizen within hours before going on a worldwide rampage? With nano-assemblers, the rules of supply, laws of transportation, and manufacturing limitations are turned on their head. As such, any controls put in place to limit armourment are undermined in an instant.

Of course, these kinds of scenarios are purely speculation, in a world full of nano-assemblers, the playing field would be severely levelled. Who knows what scenarios would present themselves? Nanotechnology itself paves the way for unimaginable abuse. At its most basic, it could provide means to simply and barbarically destroy human bodies, at its most advanced, it could turn every one of us into powerful gods, able to truly manipulate our environments and bodies.

At the moment though, nanotechnology in these forms is not yet a reality. In fact, due to the differences in basic mechanics at the atomic level, the dream of nanoscopic robots able to manipulate molecules could remain just that – a dream.

So what other options does a would-be evil tyrant have? Well, blasphemous scientists are always looking for ways to play god, providing a few more ways to wreak havoc on society. Potentially there is nothing to stop corrupt governments or corporations creating an array of superhuman, cybernetic, or mutant monsters reminiscent of Saturday morning cartoons. Creating “The Hulk” isn’t too far off, there is much research going on in the field of increased strength.

Many other superpowers are around the corner, and cybernetics could allow any manner of weapons to be incorporated into the body, such as a cannon for an arm. Once we have mastered biology, the limits are again set by our imaginations. My favourite cartoon character of all time, Hordak from He-Man/She-ra, was modifying bodies to create an army of elite evil warriors back in the early 80s. A real life Hordak needn’t be far away. 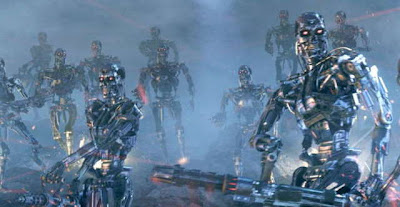 The very fabric of our existence could become an attractive target for all you destruction merchants, if time travel ever becomes possible, and it’s looking like, in some form at least, it will. But forget about “Terminator-esque” scenarios, any evil time travellers would be ruthlessly efficient, there would be no Hollywood happy endings in real life.

The Chinese controlled the weather to prevent rain during the 2008 Olympics. This was just the first step in controlling the world around us. Controlling hurricanes, earthquakes, volcanoes and the like are not outside the realms of possibility, and many speculate that it's already happening. 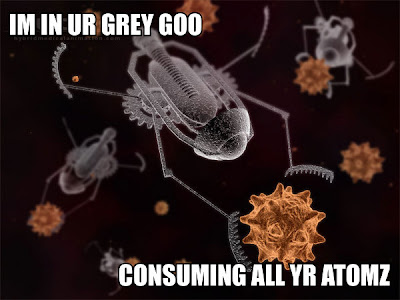 All of these powerful technologies have one thing in common, they involve manipulation. Manipulation of matter, biology, the weather, or even time itself. It seems we are on the verge of mastering the universe in the most intricate fashion. And unlike nuclear weapons, these new God-like powers will be in the hands of the majority, corporations and individuals. What a scary thought. How can the general population which is riddled with wrongdoers, do-gooders and just plain irrationals, remain responsible with such awesome and destructive power? Should we restrict technology and not allow society down this dark and blasphemous path?

Well, taking such a stance is naïve. The fact is, even if such advances are banned, someone will still do it. Legislation, as always, is not the answer. Not only does it give unfair advantage to those who want to break the law, but the legislation itself is usually extremely narrow scoped. It will restrict an action deemed to have negative consequences without taking into account that it may also have good implications. Take the legislation against stem cells as a prime example. Holding back on science and progress with legislation is not just pointless, it is highly immoral. Any leader who does so, either by political power or religious manipulation, has the blood of future generations on their hands.

Whatever their reason, restricting knowledge equates to deliberate neglect. The power to manipulate the universe is the destiny of conscious life. Since we first picked up a stick and used it as a tool, humanity has been on a journey, a journey of discovery and creation. These new powers are no more than an extension of building an aeroplane, performing a heart bypass, or planting a tree. They may well be abused to the point where they threaten our entire existence, but without them, we stagnate, or even regress.

Considering, for a second, the human spirit, I really don’t think that’s an option.


“One kills a man, one is an assassin; one kills millions, one is a conqueror; one kills everybody, one is a god.” ~ Jean Rostand

have your seriously considered ways of accomplishing this or is it just an fantasy?