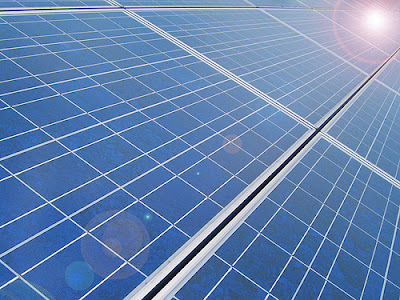 Distributed infrastructure, such as that provided by the internet, allows for more reliability - if one node is damaged, it barely affects the rest of the network. It affords more freedom - less reliance on a centralised 'grid' controlled and manipulated by the elite. It is more in-line with nature, creating a symbiotic entity where the sum is greater than its parts, and each participant compliments the rest with cooperation but doesn't burden the whole either.

However, the centralised systems we are used to, those which provide our public infrastructure, still have a place, because they can often be more efficient than a distributed system. For example, it would be difficult to run a train system with solar panels on the station roof, so the train taps into the main grid.

When assessing and managing the Earth's resources, a global inventory would be important. We would need to decide on the most efficient solution between distributed and centralised infrastructure, and having access to all resources would allow us to choose the most efficient solution. If one country has more resources than another and it does not share them, this will burden the world system as a whole. If, for example, a hot country like Egypt built solar panels across the desert but didn't share this energy, it could hold back the whole planet, because this energy could be used to run a factory supplying the whole of Africa, or even the world, with food.

It is likely that both ideas will have to develop in parallel. There is no escaping the growth of distributed systems, their dropping cost and increasing accessibility. Home manufacture, decentralised production, home automation, home agriculture, home energy and more are making it easier to separate ourselves from the mainstream infrastructure and increase our self sufficiency.


Similarly, sharing and pooling resources has its benefits. It gives us more possibilities, allows us to combine systems, and develop simplified and more efficient solutions. So we should be looking at the best way to combine the two techniques.